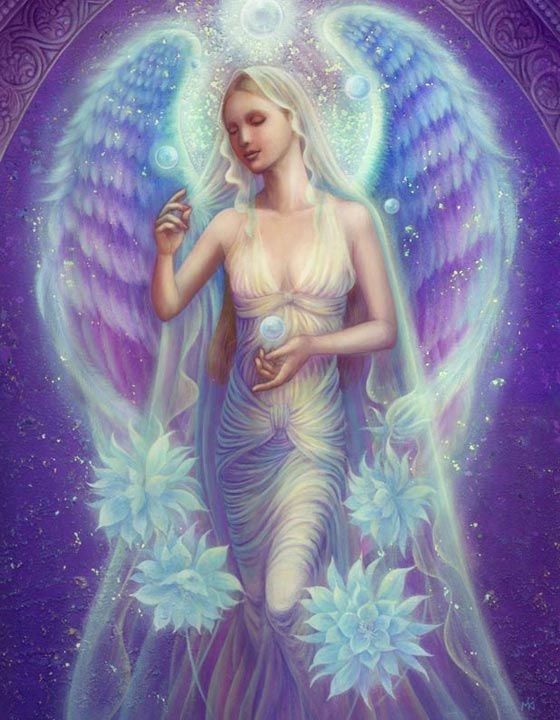 Some of the Archangel Anael’s Celestial tasks.

Some aditional information for the curious minds:

Anael Hebrew: “Joy of God” or “Grace of God”, also known as Aniel. She is an Angel in Jewish lore and Angelology, and is often included in lists as being one of the seven archangels. The name Anael or Hanael  derives from Hebrew hana’ah, “joy”, “pleasure” Her family seal is a crescent moon with a small dove beneath it. From Hebrew hana’ah means”delight,” “enjoyment” plus el “God.”

Anael means “the Grace of God” which is related to her heavenly task. She is listed as one of the 7 Archangels in most teachings. From a Kabbalistic perspective it is thought that this Angel escorted Enoch (Angel Metatron).

The Archangel Anael is believed to be smaller than most with wavy light blond hair and one pair of large cream white wings, but there are others who have seen her as an Angel with long black hair and with large gray wings.

Archangel Anael is reputed to be the daughter of the Archangel Michael. As she is one of the Angels of creation but I do not believe this, I find Michael to be as an older brother with whom Anael shares multiple tasks.

Anael is one of the Angels of Creation this list also includes: Orifiel, Zachariel, Samael, Raphael, Gabriel & Michael.

Magical Intentions: All aspects of love, Moon energy, Yin Yang, Duality, Justice, Creativity, Fairies, Nature Spirits, Healing, affairs, friendships and marriage. All artistic matters, Emotional healing, the arts and beauty. Venus’s energies are warm, sensuous, and fulfilling. Efforts that involve any type of pleasure, comfort, and luxury, as well as the arts and music work well on her day. As Venus lends its sensuous influences to the energies of this day (Friday), use it for any magical work that deals with matters of the Heart. Romance, Marriage, Sexual Matters, Physical Beauty, Friendship, Strangers and Partnerships. 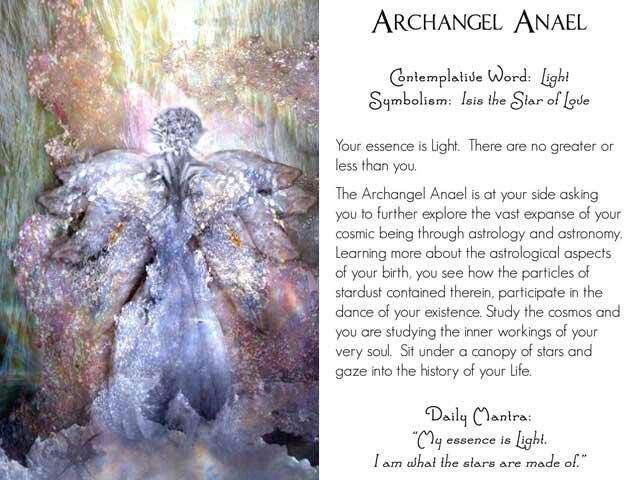 Let me introduce you to the strong yet graceful Angel, her eccentric feminine energy represents that of a justice fighter, a warrior who fights for what she believes with a passion. She truly is one of the strongest feminine Angels out there, one who in truth belongs within the list of the ruling Angels yet due to her feminine energy was left out. Archangel Anael is the ruler of Venus, Fridays and the third heaven where she guards over humanity’s souls after they have past and left Earth. Next to being a ruler of the third heavens the Archangel Anael also has a connection to the Zodiac Pisces and Libra.

The Archangel Anael appeared in the Midrashim legends where she had a small role but that does not take away the importance of this Angel. She is one of the oldest angels who works together with several of the Archangels such as Michael, Gabriel and Raphael who are to her like brothers, they share a task in which they protect, heal and restore humanity. A task that asks for discretion, care and patience, that is why she had decided with her brethren to work in the shadows of them.  She knew that mankind wasn’t ready to learn her part of the Celestial truths, she knew that if she worked through different forms she’d reach more than as her Celestial self. This is why she was often seen as a Goddess by the ancient civilization, they connected more to her as a Elohim than as Angel and she was okay with that. Anael makes an appearance within multiple ancient cultures and was always represented as a divine being with an important role.

Let’s take a look at the different goddesses in our history, each civilization had their own version. The reason behind all the names is rather simple, you have multiple groups of people spread over the world, each of them experience her energy and acknowledge her by giving her a name to worship. But none of them had the ability to connect to eachother and thus followed their own version of the divine energy creating a collection of names that all connect to one being in this case Anael. Let’s go over a few names that are either connected to her or are her:

Even the ancient art pieces of these different Goddesses are alike in some ways. 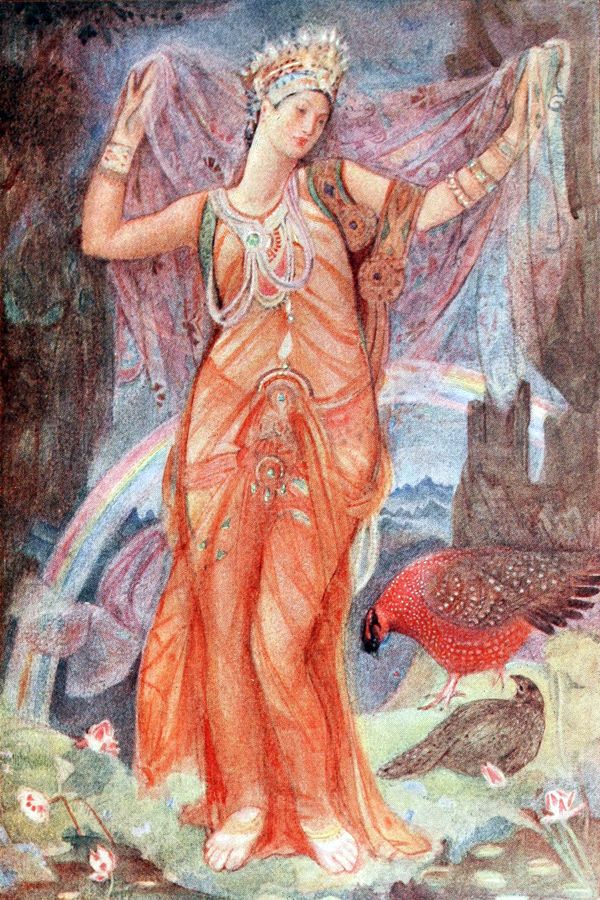 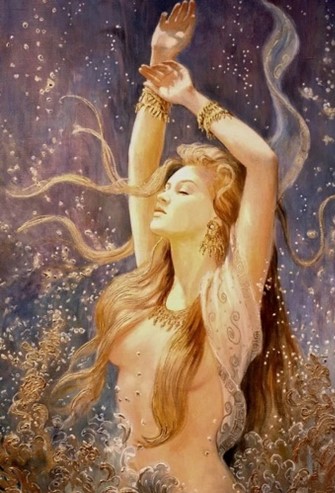 Archangel Anael and her Dark side;

The Archangel Anael has a darker side as you hear in the video above. There is ocnfusion when it comes to her identity is she a male or a female, is she another version of Samael or is she all together an different being not angelic at all?

Let’s find the answers to those questions together:

We start by collecting the facts of the Archangel Anael.

The Archangel Anael had her energy adjust, as the Earth and its souls changed so did her approach. We’ve become more open over the years, accepting of certain divine beings even before the Angels came into our Spiritual life’s. We understood terms such as incarnated and believed in Ascended masters, Souls who incarnated amongst us to guide us during times of change. They were our teachers and thus Anael found her place amongst that list of precious light beings. For some this might be hart to understand, it is a question I’ve had to answer several times and so I shall add it to Anael’s story once again. A divine soul can be interpreted in several ways by different cultures but that does not change the divinity itself. The multiple civilizations and belief systems simply connected to her in their own way, giving her a name that felt correct to them.

Archangel Anael is also closely connected to the energies of the modern divine goddesses Pistis Sophia, the Shekinah and Mother Mary. This does not mean that she is all of them for I do not believe this, I believe she is Sophia and closely related to the Divine Goddesses Shekinah and Mother Mary. Amongst her lighter sides of love, Mother energies and justice she also connects to darker sides like the Moon and the stars each has their dark side as well.

Does this make her an darker entity? No she has had her own path, a history of which she had taken sorrow and fears upon her which lowers an Angel’s higher vibration but that did not cause her to fall. In fact she formed a way to understand both the lighter side and darker side in order to clear and defeat darkness you have to embrace it. She is the Angel that was send to Earth to roam the shadows where she discovered the hidden wisdom of the night. Anael symbolizes the yin and yang, duality and justice for all. She holds a keen insight in the dark and all that comes with it such as mystery, seduction, sex which is what makes this Angel so powerful. She helps you connect to the magical energies of our universe and the magic of the Moon and its stars, awakens the passion we are missing in life and therefor has been given a dark name related to her misfortunate past: Lilith. A story I shall explain on Lilith Page.

As the Angel of the Arts she was often believed to represent the muses though I believe she is the mother of them, her energy was used to create those beautiful divine energies that stimulate our creative side of the soul.