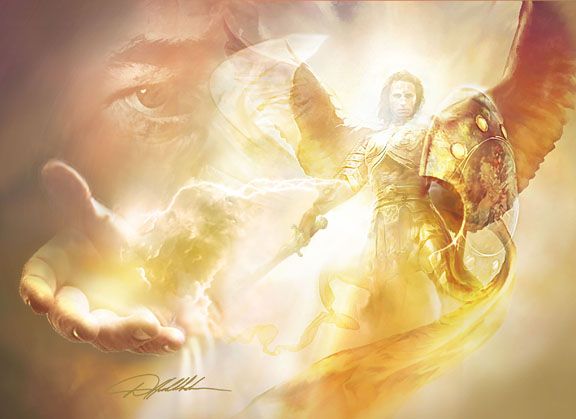 The beginning and the principalities.

Many seem to think that only Earth exists within the universe but this is not the case, there are multiple places in our universe and each has its own dimensions. Within those Dimensions you find multiple subplans and other pocket realms also called rooms which just gives you an idea how intricate the grand design truly is. The Angelic realm reached from the sixth Dimension to the twelfth, their kingdom is enormous and so much more complicated then you’d expect it to be. There are many who have a misconception of the term Angel believing that any divine energy coming from another dimension is an Angel, I am sorry to disappoint you but that is not true. An Angel is a being of light who shares its wisdom with those ready and willing to receive their knowledge. They come from their own realm and aren’t the only divine beings you could encounter though they are the ones who are closest to humanity. They had been known as the messengers of God and in a way they are but it’s not all these magnificent beings do. But are these the same beings the ancient cultures had mentioned in their teachings or is there something we are missing? A message we might have misinterpreted?

There has been a specific race of divine beings also known as Elohim who are principalities that interacted with the humans, they had the ability to physically open ways to communicate with them through humanities connection with the Creator, God of Earth. The energies surrounding our world hadn’t been ready for the true strength of an Angelic Aura as they visit, they were too large and filled with so much energy it would fill up an entire dimension. This is why they had decided to spread their word through beings created of their own energy but with a less overwhelming aura. There were some who had decided to incarnate while others choose to work through the Elohim connected to our plane. Working with less energy seemed to become complicated  as well, it made it hard for the messages to come through and thus created  several of the legends, myths and stories connected to the Angels that had gotten taken out of context or entirely got lost in translation.

The ancient races were unaware of confusement their texts would cause for the generations after them, they were after all only sharing the knowledge given to them without knowing they had missed pieces or misinterpreted some of the given information. You will have to work in the higher dimensions if you wish to channel the Angels directly, they are to high of vibration for most and receiving their message isn’t as easy as one would think. There are those who have believed to work with the Archangels but in fact are in connection with one of their legion, a being of light with a lower energy vibration. Mind you this does not mean they are evil, far from it they are much like the actual Archangels messengers in connection with the Archangel and its ray of light.

But now the explanation this page is about, the Principalities.

The Principalities are enormous, they make up entire planes with their bodies as we live within a larger entity better known as the universe itself. We are all souls living within a always expanding soul that lives within a living energy best described as yet another soul. This is something most cannot comprehend because the truth is, we live within a living organism that shares its energy with us for we much like them are beings of energy part of that same hierarchy.

But what does this have to do with the Principalities exactly?

The principalities from this Earth are rulers of their own dimensions, planets, stars, nebula, planes and realms all these energies are part of them. They are the rulers who created the council, they created the elders and gave form to all that is including the Archangels. These divine beings have created the Archangels to share the still unknown truth behind the universal teachings which stands for the teachings of Earth’s heavenly spheres. As human we were taught that our planet was the center of the universe, we never looked beyond this until now which showed us that humanity was ready. One of the Principalities I shall mention is the being Asarael. She is a beautiful Divine principality whose name means the cleansing of God. This is because represents the light of all divine beings come together to cleanse the area in which she reigns. In Hinduism, she can be likened to, the Goddess Usha. Usha is described in Vedic teachings as being the Goddess of the dawn. This is why I find the use of the word Angel to describe these beings a bit difficult, they are so much more, they are the Elohim and surely not the messengers of God. They are the beings representing the all light and energy coming from God. The only reason I use the term Angel or Archangel more than Elohim is because this term is most accepted amongst my readers know.

These beings may be messengers to most of humanity that does not mean this is exactly true,  they are divine beings who stand for the universal truth, share a part of intelligence from the creator bound to them and their soul. They spread this intelligence by sending forth smaller souls such as prophets, light workers or spiritual guides. Beings us humans find easier to hear than the actual Principality and Archangel themselves.