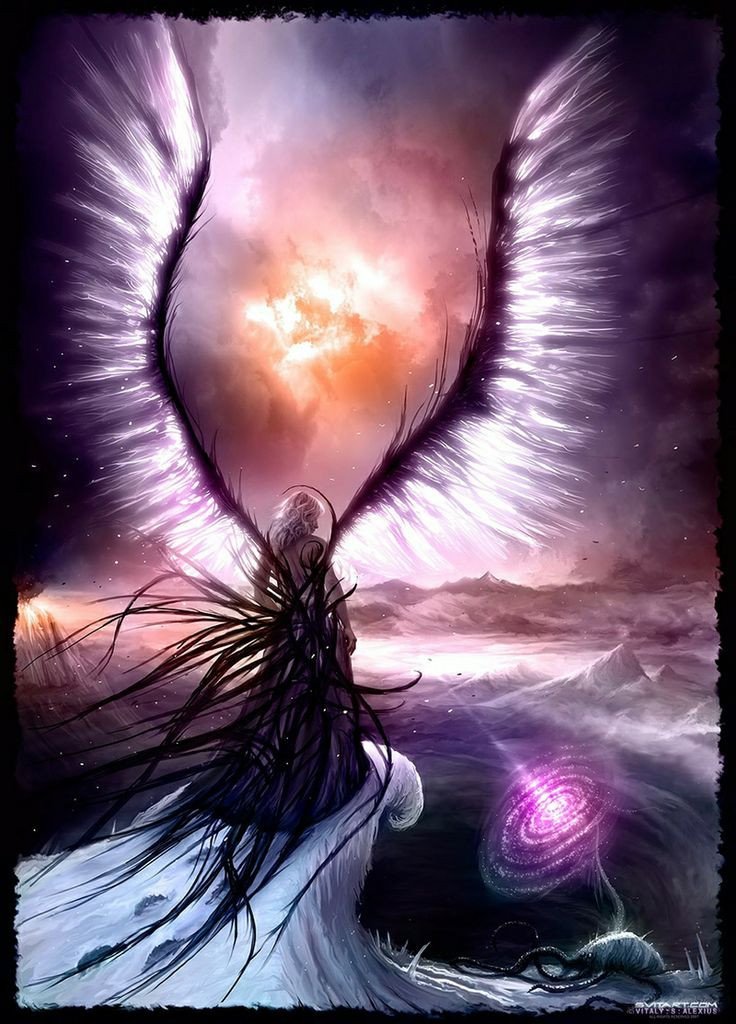 Introducing the Fallen ones;

The fallen ones, Angels who descended into the lower realms after having been part of the higher vibrational order. There are several reasons for an angel to become part of the lower realms not all are due to the rebellion we’ve been told about. For one, there hasn’t been one but several rebellions in which several divine souls have lost ranks by choice or due to banishment. These rebellions were started after one being named Samjaza together with his general choose to stand up against the divine creators.

The first rebellion was led by the Archangel Samjaza who is better known to us as Samael, who was misled by Azazel. A being who wanted to become a human in order to lead humanity into destruction no matter the cost. This being of darkness hoped to spread his energy across the universe feeding of it through the suffering of others in the hopes it would make him grow, become stronger than all those of creating energies.

It took Azazel a lot of effort and energy to convince Samael who held nothing but love for the creator and did not want to lose his higher vibrational energy body. It wasn’t till Samael was confronted with the unexpected separation of his twin energy that he began to believe the lies Azazel had been sharing. He not only made Samael believe that humans were lesser beings but also convinced Samael that he should not be subjected to human care. Azazel believed that Samael much like all other ruling Archangels had the power to rule as a king demanding humanity to bow to his needs and rules. Samael who had been feeling lost after the separation of his feminine counterpart thought everything his colleague had shared over and believed everything he had been spreading through the heavens. Archangel Samael had been tricked by one of the most manipulative beings in our universe. The loss of another can make us loss control of our true self well that is exactly what happened to Samael as well. He had forgotten who he was, he had become lost and therefore made choices he would come to regret in the future.

He began preparing with Azazel who had been aware before leading their legions led by their commanders towards a fate worse than death for Angelic souls. Infinity in a lower realm without having the ability to return home. These legions filled with Angels and other high vibrational beings were left in realms that resided within the 5th and 6th dimension of the Earth’s atmosphere. One of those realms we’ve been aware off in part is known as Avalon where those who fell tried to find a place for them to rule. There were others who choose to become walk ins, beings who entered the physical bodies of humans on Earth an interference that had never been part of the grand design. This combining energy with the genetics altered the human physics and genes forever. Having these two completely different type of souls become part of one and the same fleshly body created manipulated bodies such as giants. No human body can hold all that energy a celestial consciousness has, it grows in size. It seemed nothing was working for these beings and thus they decided to create a new civilization with humanity as slaves and thus the creator beings, the elders as some might call them choose to exile these beings while still being in their fleshly yet supernatural physical bodies. They were send to a planet in one of the far darker corners of our universe together with their leaders while the creator welcomed a new and different ruler named Ariel to help form a pure bloodline in the hope it would take away the devastation the fallen ones had created.

The fallen ones creations, the physical giants they had formed found a way to return to Earth’s dimensions where they kept some of the Archangel Ariel’s teachings combining it with some of their own. Each one of these intelligent supernatural giants had found a place within their own domain, a realm close to ours where they spend generation upon generation learning from the mistakes their ancestors made.

Right when the first rebellion seemed to have been settled the second one began and its leader is one you know of as Lucifer but that is not his true name. The name, the title Lucifer is merely a cover given to this being who led the second rebellion. This being’s true name shall not appear on my side for I do not wish to give it any power, the true Angelic souls amongst you will know its name. If not. then you as person are not ready for this universal truth. 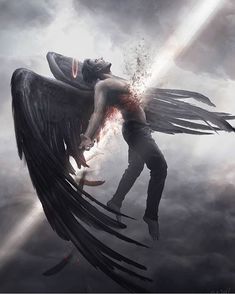 The second Rebellion came to be much later than the first yet still during the early times in ancient civilization. We’ve been taught that there was merely one rebellion led by an angel named Lucifer, an angel known as the bringer of light. How come such a being whose name represents the very thing that created Celestial world has fallen? A being connected to the planet of love and light cannot also represent darkness.

Who is Lucifer truly?

A question many have asked before, the Archangel Lucifer has gone by many names. Some think Samael is Lucifer and there are those who believe Lucifer is connected to Michael for both names represent their connection to the creator and its light. But is this is not true, no I do not believe Michael and Lucifer are one and the same Archangel even though their names and tasks are rather alike. I’ve been told by the Archangel Gabriel that Lucifer was named Lumiel in the heavens and not the actual entity behind the second rebellion, his name much like the that of Archangel Samael was used but the entity Azazel and other darker forces who influenced the leaders of mankind. He wished to create fear by announcing a Divine being who came from heaven to spread darkness in the hope he could control them.

The truth behind Lucifer was so different, he was worshiped in the past because they  associated him with Jesus who holds the same title morning and evening star. They led the population believe Yeshua was equivalent to Mithra while keeping the truth to themselves. There are scriptures in which they speak of Lucifer (Lucifer, how you have fallen) which was only used in a symbolic way to explain they were using the light and the truth in an evil way. They were bearing the light like Lucifer the light-bringer but they used this for their own power, greed and all the other sins we face in life. It was during those ancient times that they used the teachings brought to humanity by several angels in a wrong way forcing the people through multiple religious wars. But those wars, the third rebellion was created by mankind not Lucifer, nor Samael or even Azazel.

Now let’s go back to the second rebellion before explaining the third.

The second rebellion was before Lucifer’s fall, he was not part of this in fact his fall stood for the fall of mankind’s leaders after they used the truth and light to mislead those following them. The second rebellion took place around the time ancient cultures such as the Sumerian, Egyptian and Canaanite ruled. This rebellion led to the fall of Atlantis while true teachers tried to restore everything but they failed giving way for the false teachings to spread across the world. Think about the symbolism you find within the bible, those who have read the great book can see there are things missing, things they kept out for reasons they still don’t want you to know.

Throughout the centuries the rulers and their Archons have continued to spread these false teachings partly out of anger, envy and possibly even jealousy. It created the world we live in now, filled with darkness, negativity and illnesses only growing as their influences keep spreading. Of course they adjust their tactic, they use the knowledge they have gained throughout the centuries and influences mankind in new ways each time.

The Angels who have fallen during the first rebellion were unable to go home, they have taken over other realms and blocked higher beings of light such as the Elohim and Archangels. They do not wish those beings interfere with their plans surrounding realms such as Avalon where they created the round table in the hope it would resemble that what they had in the heavens. They used Metatron’s wisdom hoping they would be able to build a new network since he is one of the creating Archangels who holds the universal blue prints with him. They appeared to him when he was on Earth as Enoch and shared with him the blue prints of Earth but he as might principality before his fall knew a way through the consciousness and connected with those of higher vibrations. Enoch felt sorry for the fallen ones and wanted to help offer them the chance for a way out, something they used against him. Azazel and others thought they could use Enoch’s wisdom for their own purposes, luckily he stayed pure and saw through their manipulative ways. He was elevated to Archangelic Status his name changing from Enoch to Metatron which stands for dedicated leader.

Sadly they had been able to gain some of his wisdom before he was became an Archangel, they now learned how to place seals something we all have within our energetic body think of the chakra’s we have, those are seals as well.. They learned most of mankind’s DNA due to the knowledge they gained from these seals and found ways to influence, feed of them and keep them below the high vibrations making it hard if not impossible to connect to ones higher self. They hope to imprison mankind, having them lose all connection to the divine. Their diabolical plan that only a few know is what the Archangel Michael and many other Angels have been working against. Some have come to Earth incarnated in a body during times of struggle hoping they can bring enlightenment to mankind before the fallen ones win this ongoing battle. These fallen ones found ways to tap in, filter the energy of mankind while feeding of it. They often stand behind those of power stimulating and influencing the ego for they have an always growing hunger for power, wealth and other luxury. They are able to twist the truth in our material world leaving people confused and hit a dead end time and time again.

I’ve witnessed all this and found more about it knowing it has to be spread over the world, there are only a few teachers who go this deep on the topic of the ongoing battle. They often find the topic to toxic or to dark but is it truly? To me we cannot grow until we learn, we cannot develop until we learn what the fallen ones have done to not just mankind but many of the other divine beings including the Archangels. Trust me there is a lot more that humanity is simply not yet ready to learn, a truth that will come when more souls open and learn to see through the chaos.

Conclussion the Rebellion as we know it hasn’t been as most expect, in fact it is an ongoing battle in which those who have fallen turned darkness and try to take not just mankind but other Celestial beings with them. Though the first had an actual clear date of start and end the second is less clear for it still has influences on the world. The third rebellion and upcoming fourth are part of the second only a new and always changing approach in the hope it influences different souls.