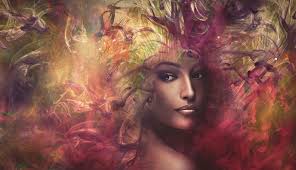 Asarael is one of the rulers who dispels darkness to bring light to mankind. She is part of the Elohim described in Genesis 1:3 where it stated: (Let there be light,) in the original script the word God was Elohim, a word that stands for: many Gods. It’s a plural for ruler, creator, God, Goddess and Deities. The reason they use the word Elohim is related to the fact that there are many creators in the universe and Asarael is one of those who brought light upon this planet. Asarael is the Goddess of light, hope and peace that you find back in multiple cultures under different names. It is because her title as creator of light that she is known to the others as a primal force of life and rightfully so.

It is said that the Goddess Asarael also known as Usha in the Hindu culture had been sprung from darkness and therefor was the first self-effulgent, white complected mother of all Gods connected to the sun. They describe her as immortal, undecaying and cloaked in the purest white light that pushes away all darkness. She is the protector of the innocence, one who reinstates glory and light within the soul of any being in the Earth’s Spheres. Another part they state which shows that their representation of the Elohim Asarael is accurate by her title Daughter of Light, a title Asarael carries herself. Asarael is not the only daughter of light but one of five connected to the five first created Archangels Michael, Gabriel, Uriel, Raphael and the always feared Samael.

A way to connect to her is through a poem created and found in the old Hindu teachings, a poem one can use to connect to the Elohim Asarael and feel the loving light when your days seem bleak.

in their white splendour like the waves of waters.

She maketh paths all easy, fair to travel, and, rich,

hath shown herself benign and friendly.

thy splendours have flown up to heaven.

shining in majesty, thou Goddess Morning.

the Blessed One who spreadeth through the distance.

Daughter of Heaven, bring wealth to give us comfort.

with thine oxen thou bearest riches at thy will and pleasure;

Thou who, a Goddess, Child of Heaven,

so men with store of food rise at thy dawning.

Yea, to the liberal mortal who rernaineth at home,

this Child of Heaven hath called us from our slumber;

She who at night-time with her argent lustre

hath shown herself e’en through the shades of darkness.

the Dawns on bright cars shine in wondrous fashion.

They, bringing near the stately rite’s commencement,

glory and power and might and food and vigour,

favour your servant and this day enrich him.

now for the hero, Dawns! who brings oblation;

Now for the singer when he sings the praise-song.

With prayer and holy hymn they burst them open:

the heroes’ calling on the Gods was fruitful.

Give to the singer wealth with noble heroes,

and upon us bestow wide-spreading glory.