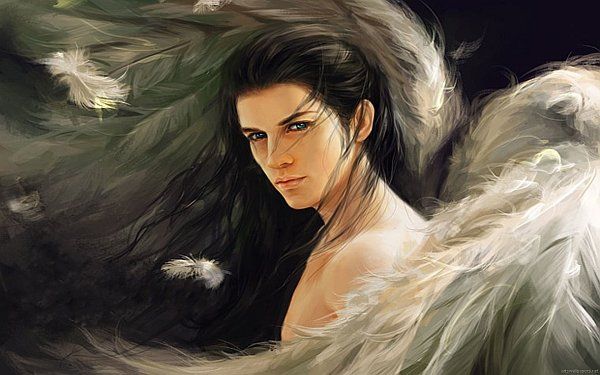 The Archangel Gabriel is one of the most discussed Angels, some say he is male other female because of his connection to the moon and its energies.

To me he is a male energy who has multiple feminine qualities about him. I’ve worked with him for many years in which he always represented himself as a gentle, wise yet strong male figure who holds secrets many have yet to discover.

Welcome to the Archangel Gabriel’s page, here I’d like to introduce you to one of the kindest Angels with whom I’ve worked for several years. Archangel Gabriel is one of the four famous Archangels who holds important roles in our history. There are a total of four enounters recorded in the bible in which he had the task to deliver an important message. This is why he was seen as God’s messenger but what other tasks did the creator grand this Angel? In truth the Archangel Gabriel represents communication, wisdom, ascention, rebirth and creating new ideas. He is also the main angel of truth, duality, mysteries and change. This list shows just how much has been forgotten about this Angel but that is about to change. As we as humans grow so does our understanding and of the heavens and its rulers including this amazing angel.

A list of some of the tasks of the Archangel Gabriel:

The Archangel Gabriel’s number: His number is the number 4 connected with the energies of practicality, organization and exactitude which he uses while being patient. The number four is known as a sacred number representing all the aspects we find in the archangel Gabriel. It is having devotion, dignity, trust, worthiness, endurance, loyalty and magic think of the four elements or the four phases of the moon both important to this Angel as well. Gabriel is one who believes in developing yourself would lead to mastering the gifts you have and he will always motivate you to keep growing. He believes in the term practice makes perfect and often intrigues those connected to the number four to stay loyal as you work on growing for there is always space to grow as a person. He is known to connect to you when you are feeling low and reminds you of the secrets hidden within your soul both the good and the bad.

Legion: Gabriel rules over a group of 200 angels who are connected to the moon, 34,442 nature spirits such as the Sidhe and other elementals are part of his legion. Each of them deliver his message of light, truth and mystery but they also spread the messages of change and transformation, or wisdom within duality.

Additional importance: Since Gabriel is the angel of the Lunar energies, it is mainly upon the waxing moon that he is powerful. During the waning phases, his energy is not the strongest. His day is Monday, but he is open for any except Saturday.

Archangel Gabriel's hidden role amongst the Legion of the Unseen.

I’ve said it once and I shall say it again there is a lot unknown about the Archangel Gabriel, one of these mysteries is his role in this universe and the reason behind his appointed task as ruler of the Moon. The creator does not ask a divine being to rule over a certain planet or energy without seeing the connected between the two. You might wonder what connection the Angel known as messenger could have with the moon and I shall explain this to the curious minds amongst my readers.

The Archangel Gabriel is part of the Legion of the unseen, also known as legion of the false dawn. He worked alongside several Archangels such as Metatron, Raphael, Camael, Anael and Uriel to spread their knowledge and light wishing nothing more than to guide mankind as they evolved. There are approximately 100,000 Angels and several other divine souls who joined this ever growing inner collective but only a group of 5000 we’re allowed to come down and enter into the alignment. These Angels were able to hide within the light where they could work alongside mankind without being seen.

The reason the members of this Legion has chosen to stay hidden is because they were able to see that there are still to many who have a hunger for power. They know what mankind could gain from the secrets they hold and how this could influence the development of their soul. A large part of man have not changed, they crave for power much like their ancestors have done in the past. It is the hunger for power that made mankind easy targets for the fallen ones who’d been roaming the Earth after they had been cast out by the creator. One of the main entities from this list is the Angel who misled several of the Angels such as Camael better known as Samael.

Not to explain the order and Gabriel’s part within it, there was a tribe of Celestial beings who’d come to Earth once a year to celebrate their existence amongst mankind, Gabriel being part of these Angels. They did not hide their arrival onto our planet instead it was celebrated by both Angels and Mankind a like. But that changed when mankind turned against the Gods, they desired more than they were ready for and retaliated against those who’ve been guiding them through their development. This retaliation was stimulated and motivated by those who had fallen and wished to control mankind which could only happen when the Angels disappeared from Earth. They succeeded, leaving us with only a sliver of proof about the Angels celebrating life alongside mankind.

It was after the fall of man also known as the third Rebellion (something I will explain in the future) the children of those who had fallen named the Nephilim took over the council of the divine. Those who choose to stand by the creator were persecuted, new visitors were treated as if they were nothing and placed in danger making it hard for the Angels to assist man the way they had. It had gotten to the point that the Nephilim, Angelic children who desired to act righteously on the creator’s behalf had work within the shadows. Being caught would lead to hurt no matter who or what kind of being you were, the fallen ones and their children would belittle, damage and defile you if you worked against them.

Gabriel did not agree with this and worked with certain Archangels to find a way to support man without being discovered by the fallen ones and their children. He uses his knowledge of the moon combined with Anael’s knowledge and that of Archangel Camael to discover a hidden path connecting the Earth to the heavenly city of lights. He uses the lunar energies on a moonless nights to clear the path for the Order of the Unseen to spread their light upon our planet blessing the soul of our planet with their light. It is truly a spectacular sight that you could compare to the Aurora Borealis. I have not seen the Aurora Borealis in person during this life, but I do know it to be magnificently beautiful, breath taking even. I hope that out of all of the sights to see in this world, that all humans at least see it once during their journey here. With that, the Zodiacal lights Gabriel has used to send Earth its blessings, the great pyramids, the Yellowstone’s Old faithful and the incline are a few of the most beautiful things that I have ever seen here in creation or hope to see within my life. With that said I truly hope that you will have the chance to enjoy this planet’s beautiful display of peace and hope.